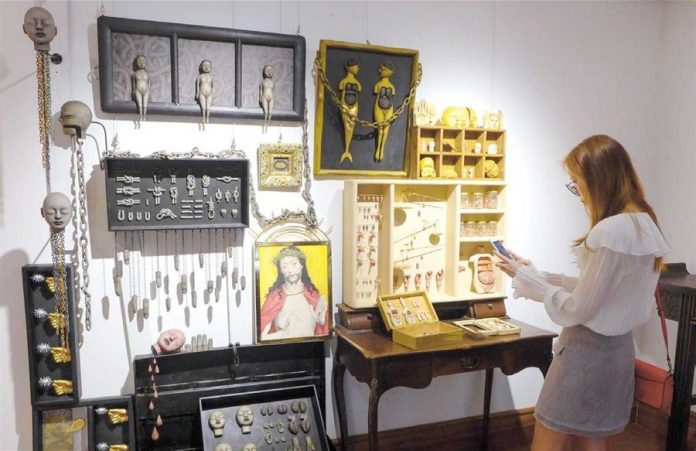 Did you know that the word cabinet originally meant “small room”? In the 1600s, these rooms were filled with books and art, a far-fetched idea for what we think of a cabinet in Utah would contain. Around the same time, similar small rooms were emerging named cabinets of curiosities. These small areas, also known as a wunderkammer, were filled with interesting collections and helped define modern museums’ rules.

The wunderkammer was a common way to display collections of interesting artifacts for about two hundred years between the 1500s-1750s. To today’s modern eye, this room would appear as a mishmash of arrangements and odd artifacts. Objects would cover every surface, even the ceiling. Monstrosities, ethnographic items, and taxidermied specimens would all share space, and you may wonder to yourself, is there any sort of arrangement? The cabinet of curiosities does have some order, but it definitely does not fit the modern ideas of someone from Utah would have for the concept.

Even though these cabinets of curiosities played some role in the creation of modern museums, much like the ones in Utah, they did not share the same ideas of visiting one. Wunderkammer’s were filled with animal cadavers in spirits, exotic insects, shells and crustaceans, minerals and fossils, and even corals and sponges. Now, this may seem similar to a museum, but the difference was that nothing had labels; it was hands-on and interactive. Instead of walking silently and observing, guests would open cases in the cabinets, remove the contents, and discuss what they felt and touched.

Art collectors would also display their collections or treasures in their wunderkammer. In these cabinets, artworks might be mixed with natural wonders, exotic imports of the New World, and the fine creations of craftsmen. The goal of these small rooms was to show through design, taste, wealth, and inquiring mind. In fact, no self-respecting naturalist, wealthy merchant, or prince would be without a wunderkammer.

So why were they so popular? Well, to simply put it, these cabinets of curiosities were created and maintained in an era of discovery, science, and humanism, but also an age permeated with older ideas of magic and sympathy. The combination of these two worldviews helped shape what the wunderkammer was. Being able to display these stories and ideas in a room to grow and explore is a far stretch for what we in Utah think of the word cabinet now, but one can only hope that something similar returns.

Crown Cabinets offers elegant high-quality cabinets throughout Utah, and at a affordable price.